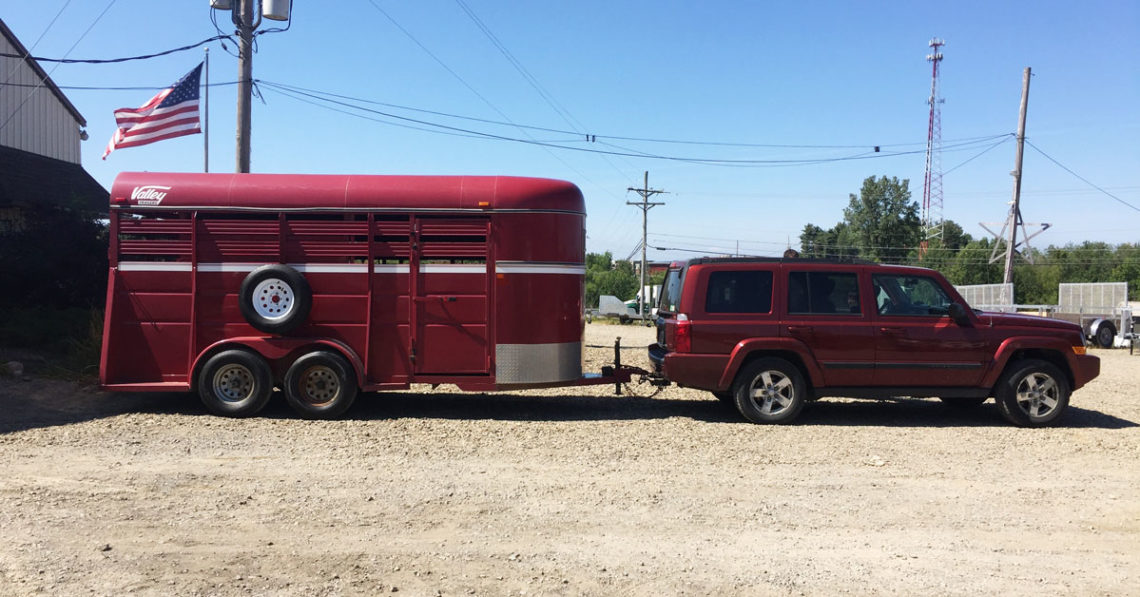 In 2005, I was fresh out of college and bought my first car that was truly MINE — a bright orange Honda Element EX. I got a lot of side-eye when I bought my toaster-on-wheels, but it has been the most amazing, versatile vehicle I’ve ever owned. After 12 years, its going strong with almost 150,000 miles on it. Little did I know when I bought it though, that one day I’d be using it to haul around five dairy goats… 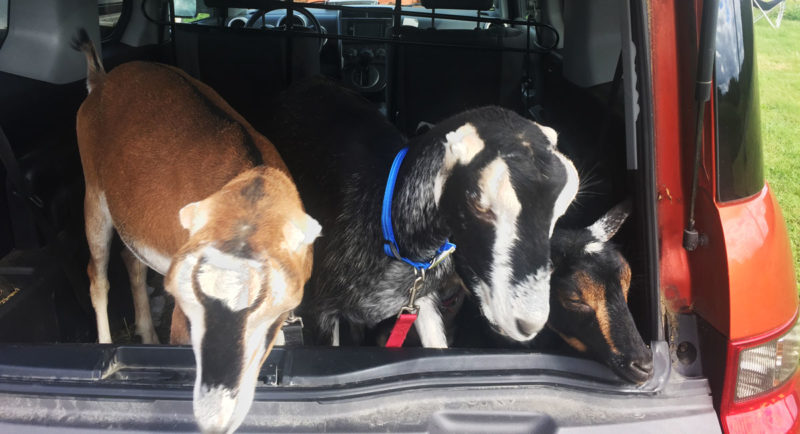 (Three of the five pictured here; Candy is in there too, behind the LaManchas, and Maizey ended up riding on the front seat because she’s a bottle-fed-baby-princess and gets away with stuff like that.)

When we brought home our very first goats — Candy and Reese, our Nigerian Dwarfs — it was no problem to toss them in the hatch of the Element. Elements have textured plastic/rubber flooring without carpets that are easy to sweep out then spray down with disinfectant. The seats are even waterproof. Hauling little Nigerians was no problem.

Then we brought home the LaManchas. They were a few months old when we drove them home two and a half hours from Ohio, but it became immediately clear that hauling full-size dairy goats (even ones that were barely 4 months old) in the Element was pushing its limits… 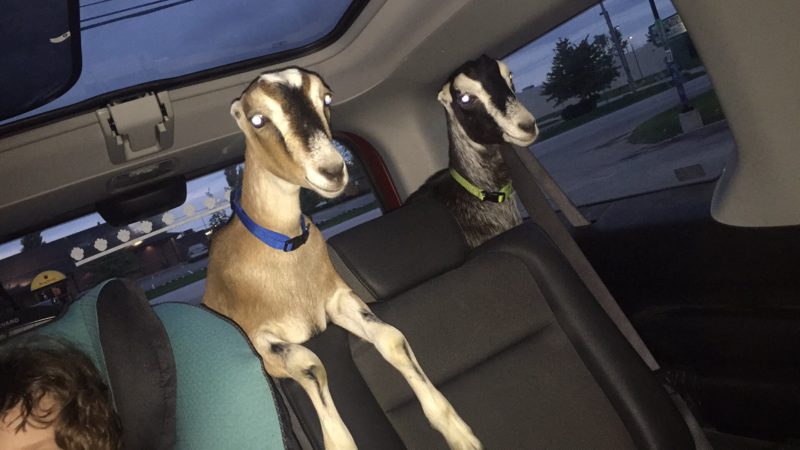 We recently had to take all 5 of our does to be vet-checked in preparation for showing at the fair this fall. We took the back seats out of the Element, which meant taking two vehicles (so I could drive the kids in another car). We installed one of those dividers that’s used for keeping a dog in the back seat, but of course the goats crashed through it in short order, and poor Mike had to drive with his arm braced between the front seats to keep them in the back.

Clearly NOT safe, and I wasn’t about to ask him to do that again.

Later the same day after finishing with the vet, we went to a local trailer dealership to see if we could find something affordable. Livestock trailers are NOT cheap, and finding an inexpensive used one one in our area (the land of ice, snow, and salted roads) that isn’t rusted out is no easy task.

We were so lucky to walk into the dealership only 30 minutes after this trailer came in as a trade-in. The previous owners were upgrading to a model that was more horse-specific with a dressing room and places to store tack. 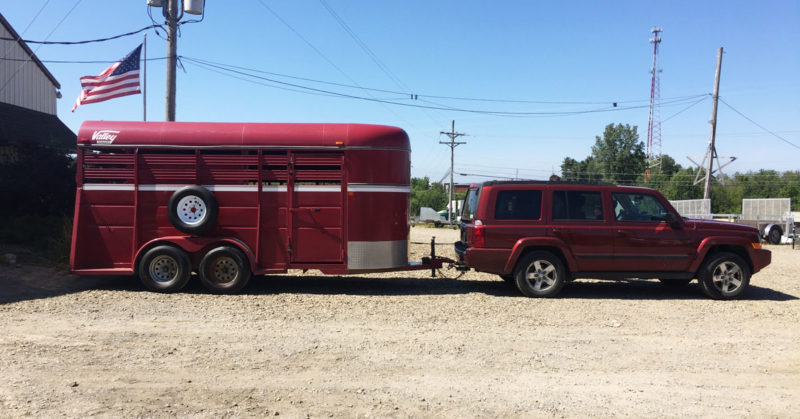 It’s a 2013 Valley stock trailer, 16′ long with the extended 7′ roof height. It has a bit of surface rust in a few spots, but nothing drastic. It also came with a spare tire and like-new rubber floor mats, which was nice.

We outfitted Mike’s Jeep Commander with a hitch and brake controller for now. The trailer is close to the upper limit for his Jeep so a truck is still in our future when we can afford one, but we’re hoping this will get us by till that’s in the budget. We only haul the goats 2 or 3 times per year, and only for very short distances, so we should be able to make do till we can upgrade. 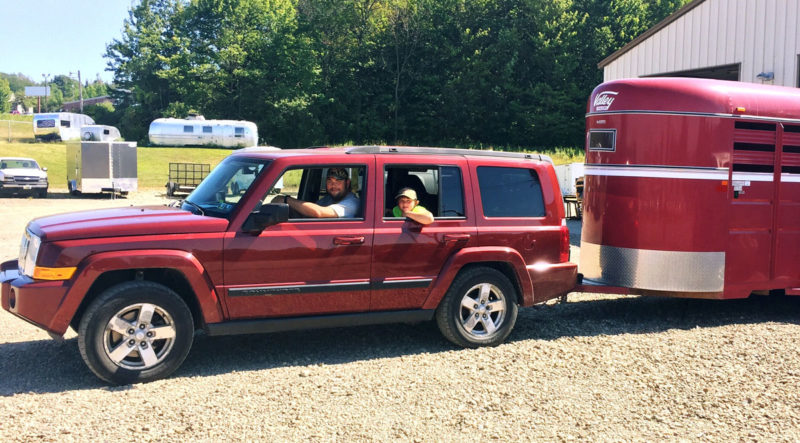 It’s a little overkill for 7 goats, but it will be nice to be able to fit our milk stand, extra hay, and other necessities in there when we go to shows. It will also grow with us if we ever expand into having pigs and/or cows some day, or worst case it should hold its value fairly well because we got it for such a fair price used. And hopefully my poor little Element will get a break from hauling livestock and last a few years longer! 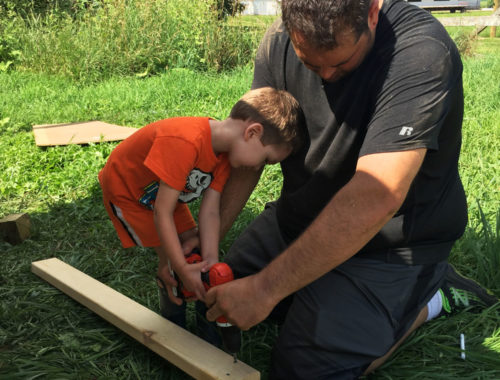 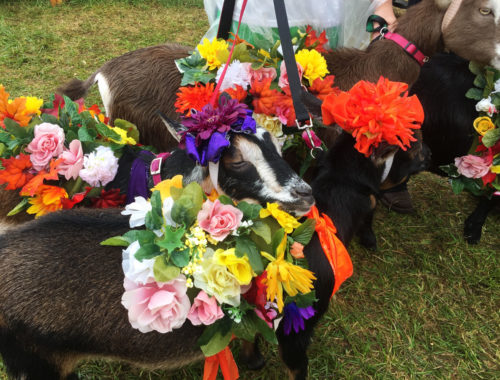 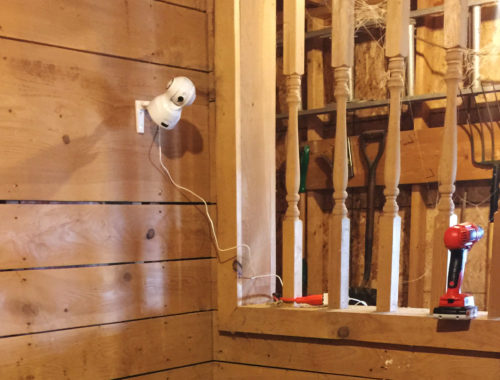 Wifi Cameras in our Barn: Getting Geeky for Kidding Season