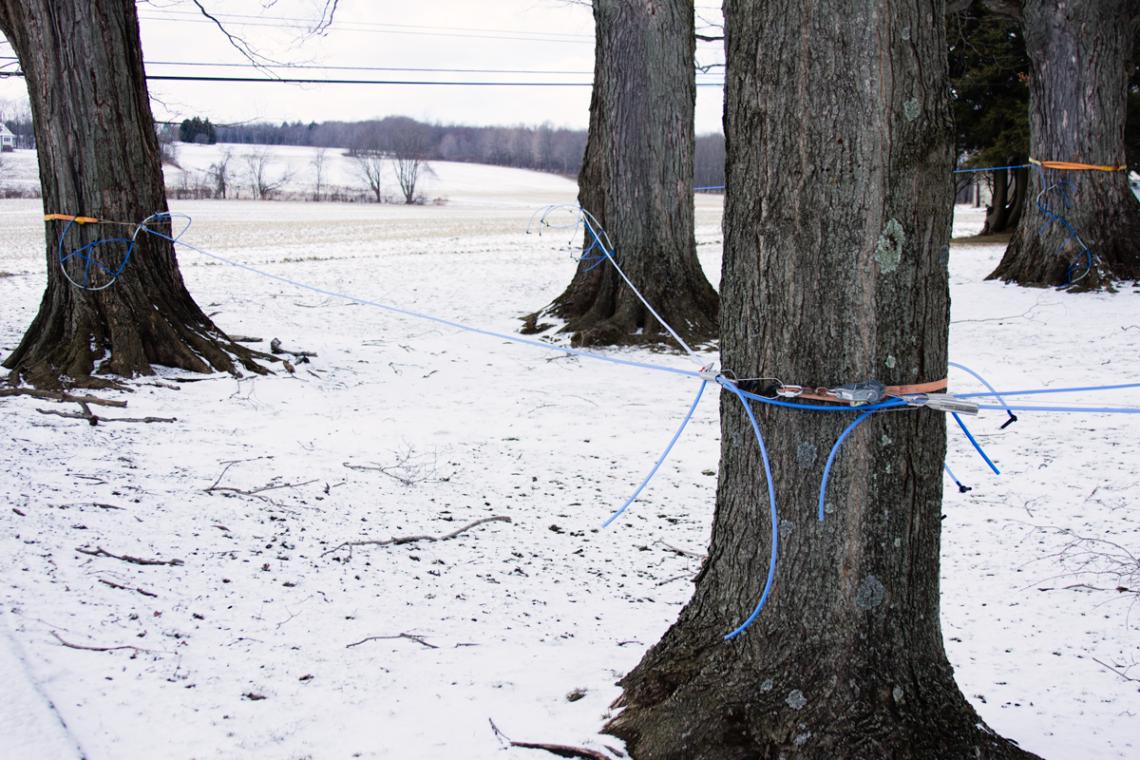 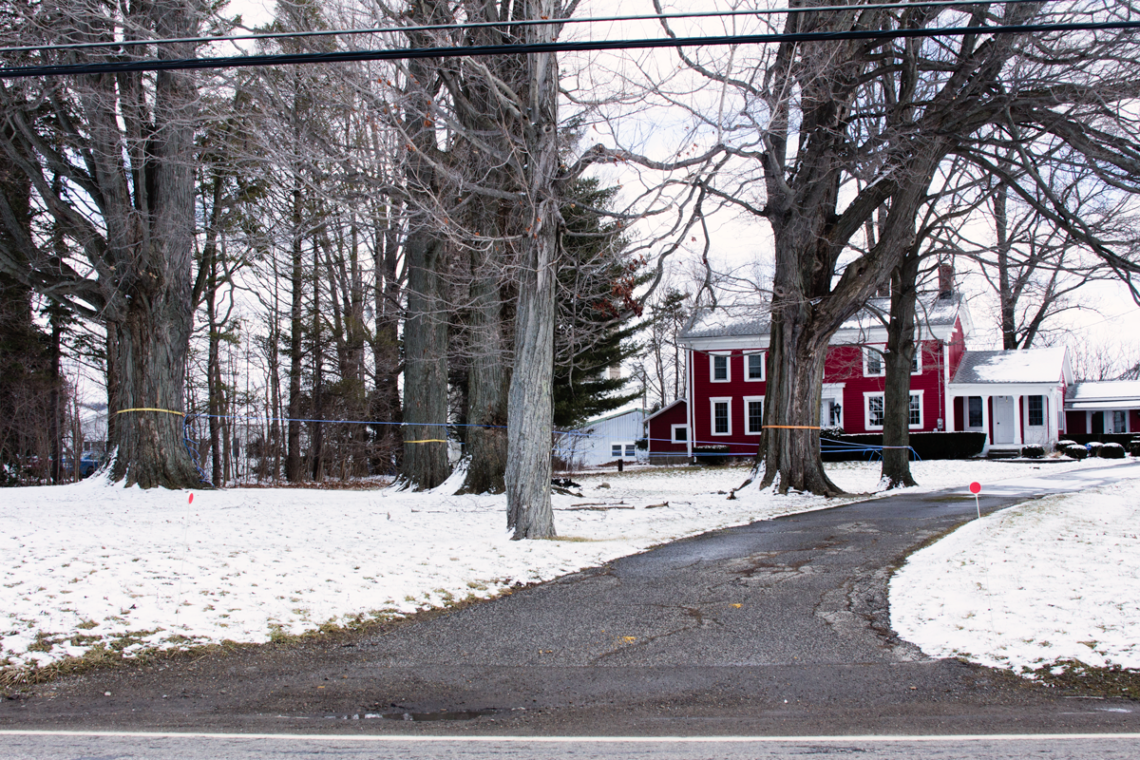 It’s been almost a month since I last updated this blog. Bad blogger. I had lots of posts scrawled on my editorial calendar, and even more good intentions, but time got away from me. Because LIFE.

Mike got a new part-time job, and is working full-time on losing weight and getting healthier. At the end of last year, he started the bariatric surgery program at a local hospital. Before being considered for surgery, he had to lose a significant amount of weight on his own. He’s had so much success so far that he’s decided to postpone surgery (hopefully indefinitely) and just continue his diet and exercise. His success so far has been infectious, and I’ve gotten on board as well. I’ve lost about twenty pounds so far, and he’s lost over double that. If you want to follow his story, he has a Facebook page called 525 Fitness where you can read more.

It’s almost that time of year! On Monday, our neighbor showed up to set up lines to tap our maple trees as soon as the sap starts to run. We have a lovely arrangement; we allow him to tap our trees, and in return he gifts us with a gallon of maple syrup. (Doesn’t get much better than that, does it?!)

He asked this year if he could run lines connecting the trees rather than hanging individual buckets, so that’s what he did on February 1st. Our front lawn is a criss-cross spiderweb of tubes. Since we won’t have to mow for several more months though, it’s hardly any bother. I’m anxious to see how much he collects from the 10 trees he has all wired-up. 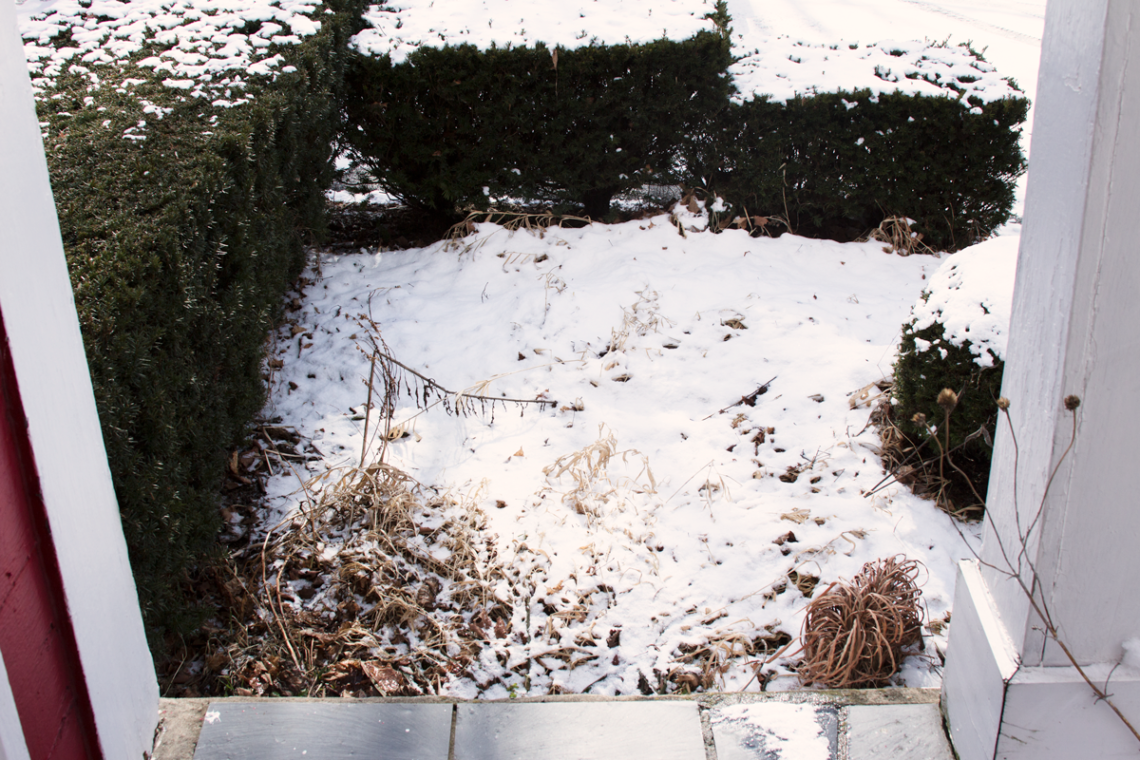 Gardens are still in the early-planning stages right now. I find gardening really overwhelming–likely because I have a notoriously black thumb. I’ve been doing a lot of reading and I feel a lot of pressure to “get it right” this year. Sigh.

I’ve been talking to Mike about ripping out some of the shrubs near our mudroom door on the front of the house. They’re planted in an odd arrangement, such that there’s a square bed that’s blocked in by shrubs on three sides, and by the porch off the kitchen on the fourth side. The result is an area approximately 4’x6′ that’s inaccessible unless you climb over a shrub or jump off the porch into the middle. It just doesn’t make sense to me. It just becomes a pain to weed and it catches all the leaves when they fall in the autumn. It’s a mess. So while I’m hesitant to pull out such healthy, well-established shrubbery, it really makes sense.

… Plus, my plan is to replace it with a big herb garden which will be right outside my kitchen door, which is a much better use of the space! (I’m a little excited about this, can you tell?!)

I have a little greenhouse (like this one) to assemble out in the workroom that’s attached to the barn, then I’ll be ready to start some seeds soon. I have spring fever. 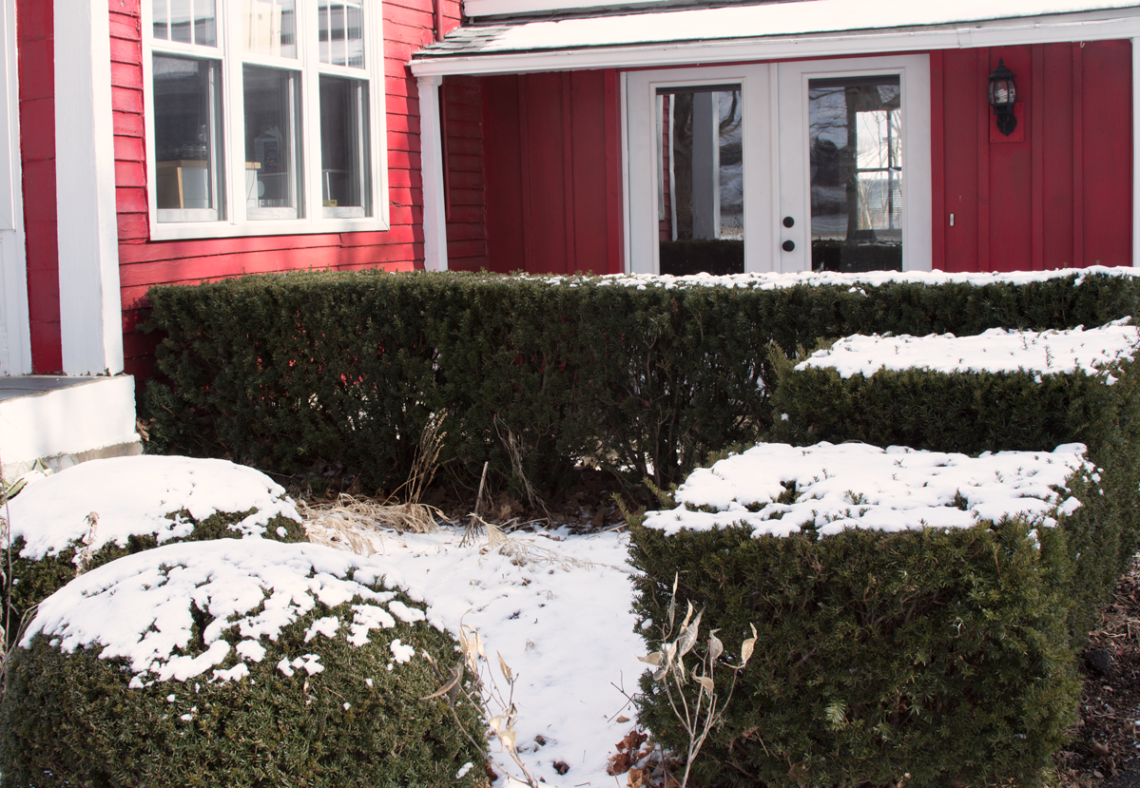 We butchered our first rabbit last week. Neither Mike nor I have ever killed or butchered a creature before (with the exception of fish, in Mike’s case), so there was a lot of anxious anticipation. We decided to use a pellet gun rather than the “broomstick method” or other means of cervical dislocation. I know most people think pellet guns are overkill or a waste of pellets/CO2, but it was just what we felt most comfortable with. Mike took care of that part, and it was instantaneous.

I did the skinning and butchering. I won’t go into detail because there are lots of books, blog posts, and YouTube videos on the topic from people who are much more experienced than we are. I pretty much followed the process in this YouTube video, which was hugely helpful. I started out wearing rubber gloves, but almost immediately discovered that wasn’t going to work. When I tried to pull the skin away from the leg to start my cuts, the gloves didn’t let me have the dexterity I needed. So, with a big sigh, I tore them off and went bare-handed. I was pretty proud of myself.

So our first rabbit is in the freezer right now. I’m thinking of thawing it for Sunday dinner. The babies from our first litter are approaching 9 weeks old, so they’ll be going into the freezer soon too. (They’re a little small still, so we decided to give them till closer to 12 weeks.) We also re-bred Mama-rabbit on Sunday, so we’ll have more babies in early March. 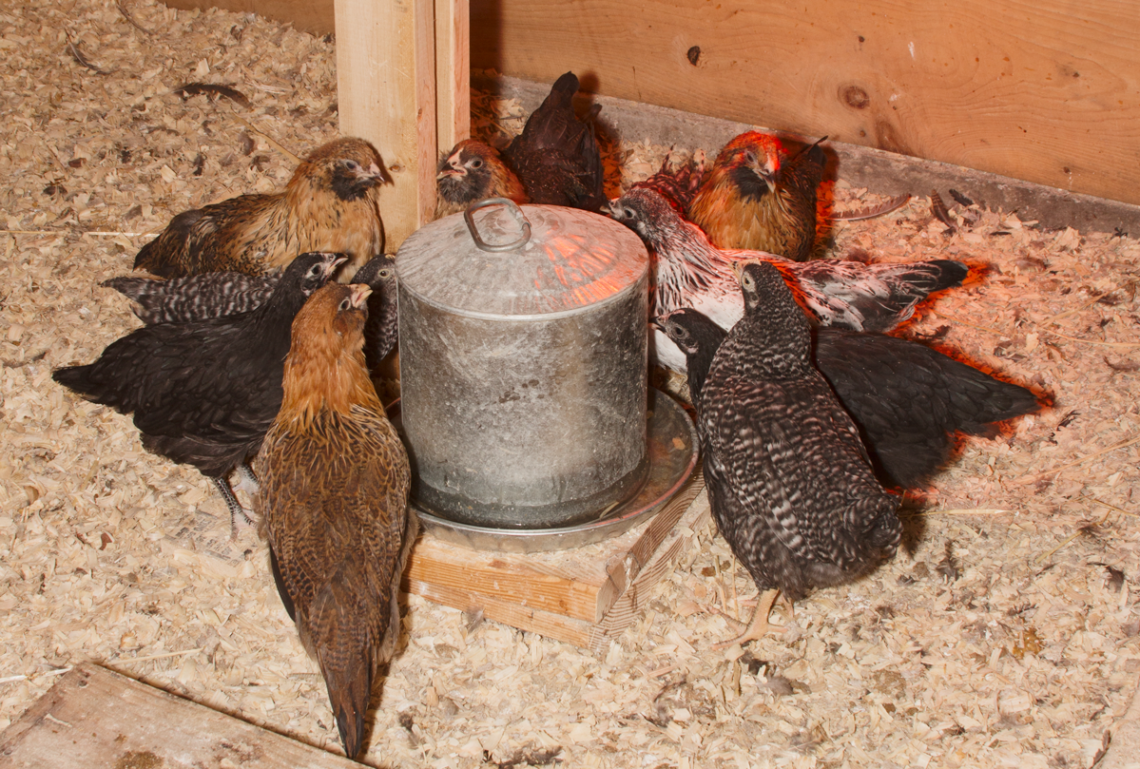 Early February brought us unseasonably warm temperatures. The snow on the ground melted and our six full-grown laying hens have been happily free ranging in our yard. They refuse to leave the coop when it snows, so it’s nice to see them out and about again. You can see a big difference in their personalities when they’re not cooped-up all day. (Pun intended – heh.)

The eleven chicks in the barn are looking a lot less like chicks and a lot more like grown chickens now. The Easter Eggers are fully-feathered and could probably go outside in another week or two. The Australorps and Barred Rocks are still a bit gangly-looking, with their neck feathers still filling in. I told Mike they can stay in the barn till they start flying out of the stall. The day I come in and find one perched in the rafters or roosting on my tractor, it’ll be out to the coop with them! (I’m hoping this will be closer to late-March or early-April, when the weather is much better and I can deep-clean the coop before tripling the amount of hens in there.)

I just got email from Tractor Supply earlier in the week saying that Chick Days will be starting soon. We don’t plan on getting any new chicks this spring, but I did promise Mike if he builds a duck house that he could bring home a trio of ducklings. Personally, I’m hoping for khaki campbells, but we’ll see what our TSC and local feed store gets in stock.

Then there are our goats… which are coming very soon, and I couldn’t be more excited! But I’ll save that for a separate post. 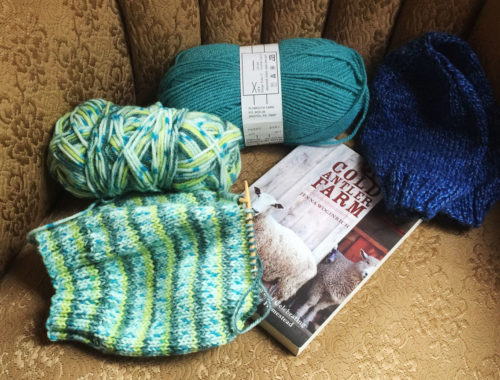 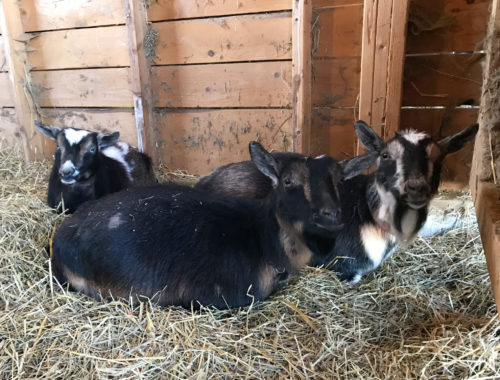 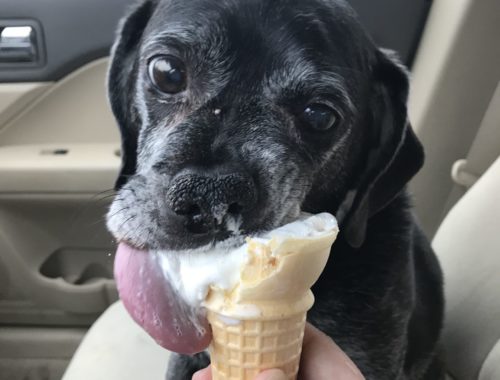 The Heartbreak of Elderly Pets